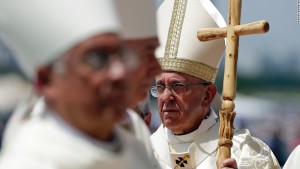 In his first homily during his Apostolic Voyage to South America, Pope Francis focused on Mary as a model for families as he spoke about the Gospel account of the wedding at Cana. More than one million people joined the Holy Father for Holy Mass in the city of Guayaquil in Ecuador on 6 July. Below is a report on the homily from Vatican Radio:

Christ’s miracle at Cana – turning water into wine – was made possible, the Pope said, precisely because the Blessed Virgin Mary “was attentive, left her concerns in God’s hands, and acted sensibly and courageously.”

Pope Francis said Mary was concerned for the needs of the newlyweds, attentive to others, and not closed in on herself. There are many circumstances today, he continued, when we can see that the “wine” – a sign of “happiness, love, and plenty” – has run out: “How many of our adolescents and young people sense that these are no longer found in their homes?” the Pope asked. “How many women, sad and lonely, wonder when love left, when it slipped away from their lives? How many elderly people feel left out of family celebrations, cast aside and longing each day for a little love?”

Mary responds to the lack of wine by approaching Jesus with confidence, by praying. Pope Francis said, “She teaches us to put our families in God’s hands, to pray, to kindle the hope which shows us that our concerns are also God’s concerns.” Prayer, he continued, “always lifts us out of our worries and concerns.”

Finally, the Holy Father said, Mary acts. Her words to the wedding attendants – “Do whatever He tells you” – are also “an invitation to us to open our hearts to Jesus, who came to serve and not to be served.” Pope Francis said we learn this especially within the family, where we learn to be servants of one another, and where no one is rejected. The family “constitutes the best social capital” and “cannot be replaced by other institutions.” Pope Francis strongly urged people to defend the family, saying it must be “helped and strengthened.”

The family, he said, is also “a small Church, a ‘domestic Church’ which, along with life, also mediates God’s tenderness and mercy.” Although our families are sometimes not what we expect them to be, are not the ‘ideal’ we picture for ourselves, nonetheless, every day within the family “miracles are performed” with the little we have. “In our own families and in the greater family to which we all belong, nothing is thrown away, nothing is useless.” Pope Francis asked for prayers for the Synod on the Family, “so that Christ can take even what might seem to us impure, scandalous, or threatening, and turn it… into a miracle.”

The Holy Father concluded his homily by pointing to the fact that, at the wedding of Cana, the best was yet to come: “for families, the richest, the deepest, and most beautiful things are yet to come.” God, he said, “always seek out the peripheries, those who have run out of wine, those who drink only of discouragement.  Jesus feels their weakness, in order to pour out the best wines for those who, for whatever reason, feel that all their jars have been broken.”