Prayer for the Family Blessed Louis and Zélie Martin

Prayer for the Family 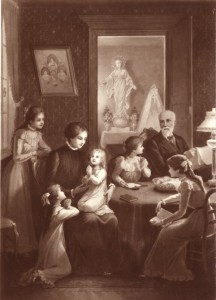 Father in Heaven
You called Louis and Zélie Martin to holiness
through their married life.

You gave them as Mother and Father to
St. Therese of Lisieux.

Through their intercession,
we ask you to bless the married couples of our diocese
and those who are preparing for marriage.

Bless our children and our grandchildren.

Guide us by your Holy Spirit to bear witness in our lives
to the beauty of the Sacrament of Marriage.

Guide us as citizens to make the kind of decisions
that will support family life, protect marriage
and respect the dignity of children.

We make this prayer through Christ our Lord.

Louis and Zélie Martin, are the first married couple to be canonised together in the history of the Church. Although they lived 150 years ago, they are in some ways a rather modern couple. Louis was a watchmaker and a socially committed Catholic. He was on of the earliest members of the Society of St. Vincent DePaul. Zélie, as well as being a home-maker, had her own lace-making business.

Louis and Zélie experienced many of the difficulties that married couples face. They had nine children, some of whom died during childhood. Zélie, herself, died of breast cancer after only nineteen years of marriage, leaving Louis a widower. They are saints because, through their married life, they grew together in holiness. While living a normal and happy life, Louis and Zélie showed their children the path to holiness and gave them space to become what God was calling them to be. One of their children is, of course, better known as St. Thérèse of Lisieux.